Herkimer Diamonds are hands down my favorite shamanic tool for energetically sensitive people. I carry an assortment of pendants and loose stones for sale. If you’d like one mailed to you, let me know. You can see my current inventory here: Lockets and Crystals

I love Herkimers because they are utterly true to their own energy and carry a very high frequency. I associate them with Star Being energy. Because they form from the center out, they are their own world. So, I find that wearing a Herkimer helps with my natural shields by putting a strong, clear, compatible vibration in my field that is very difficult for outside energy to act upon. The result is that I don’t have to work as hard to shield or filter the psychic noise around me. In addition to loving the vibe, I find they are one of my most useful tools. You’ll seldom see me in public without a Herkimer. They are very high vibration, so if you want to wear one, you may need to acclimate by wearing it for shorter periods of time and building up.

Here’s a video about them.  I confess, my shamanic skills and knowledge are much greater than my video skills…

Herkimer Diamonds are quartz crystals from Herkimer County, New York. These crystals have a natural diamond like shape, and are known for their clarity.

Five hundred million years ago, upstate New York was a shallow ocean environment where organisms called stramatalites or sea cabbages lived. These creatures, a form of bacteria, were a predominant form of life on earth at that time and responsible for producing much of the oxygen in our atmosphere that we still breath today.

These stramatalites were covered by sand an silt that turned to rock around them as they slowly rotted away. Left behind in their place, were cavities (pockets or vugs) in the rock. Over time, silica saturated water seeped through the rock, turning it from limestone into dolomitic limestone. The liquid silica collected in the cavities and recrystalized. The crystals grew as solution quartz, free floating in liquid. Each crystal started with a seed crystal that is one molecule in size and has the same shape as the outer crystal. Herkimer diamonds grow from the center out into two points (double terminated). Every one has eighteen sides, with the exception of occasional extra faces.

The organic material left over from the stamatalites is a carbon mineral called anthraxalite (like coal). Because carbon and silica do not bond, the anthraxalite covered walls of the pockets promoted the crystals to grow free floating. The black inclusions that are so common in Herkimer diaimonds , is anthraxalite.

The clarity of Herkimer diamonds is due to the purity of the silica from which they were formed. The hardness of the matrix rock (dolomitic limestone) also protected them. Some of the small ones are so clear and perfectly formed, that it is easy to see why people mistook them for diamonds. Although they are quartz crystals, not diamonds, they are actually much rarer and do not have to be facated to be appreciated….mother nature already created them perfectly.

Mariel and her husband Robert, have been collecting Herkimer diamonds for over a decade.The Herkimer diamonds featured on this site were mined in Middleville, NY, famous for producing the highest quality and clearest quartz on the planet. Handmined by family and friends, dedicated, hard rock miners our stones are direct from the earth to you.

The matrix rock in which the crystals are found is Dolomitic Limestone. The pockets can be found in horizontal layers (frozen layers of time), but are often under several feet of ‘dead’ rock which has to be removed to get down to the pay layer. Beneath the pocket layer is the ledge layer, where smaller pockets or vugs, contain crystals that are often of jewelry grade. Herkimers are often found covered in mud and rarely need more than a rinse and a scrub with water. They need not be polished, faceted or treated in any way.

When multiple crystals grow together, these formations are known as clusters. The point where the crystals connect is called a contact mark. Sometimes the crystals are found in this natural cluster formation. Other times, a group of crystals is found with contact marks. These marks are usually centripical and are extremelly unique, like a fingerprint, matching only the other crystal that it grew against. The crystals can be matched back together, like a 3d jigsaw puzzle, to re-create the original formation as it grew. It is possible, but very rare, to find clusters of hundreds of crystals. 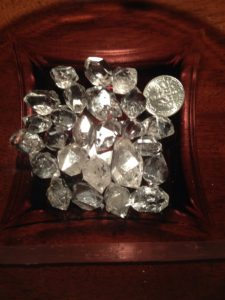 As a form of quartz crystal, Herkimer Diamonds are energy intensifiers. They also bring clarity of mind, attunement, and enhance dreams. Clusters have the added vibe of family and connection. Herkimer Diamonds are ascension stones, and they will take you to the highest spiritual vibration possible while still being in your physical body.

Your shopping cart is empty.

The Practical Shamanism Podcast is Live!